I am a Henry Norris Russell Postdoctoral Fellow in the Department of Astrophysical Sciences at Princeton University. I started my graduate study at UC Santa Cruz, and completed my PhD at Harvard University with Prof. Charlie Conroy. I'm learning the formation and evolution of massive galaxies in the universe using both observational and theoretical approaches. 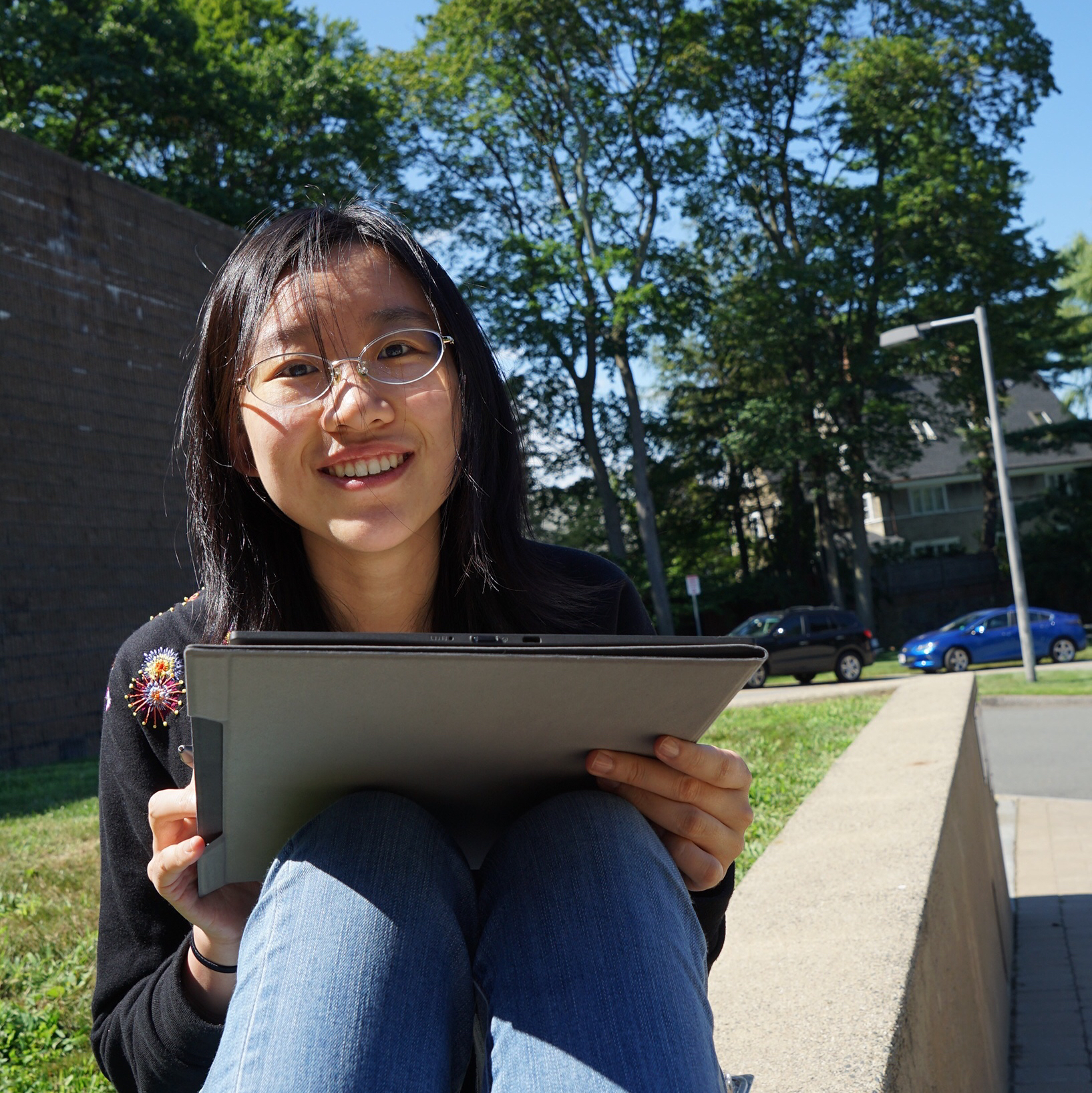 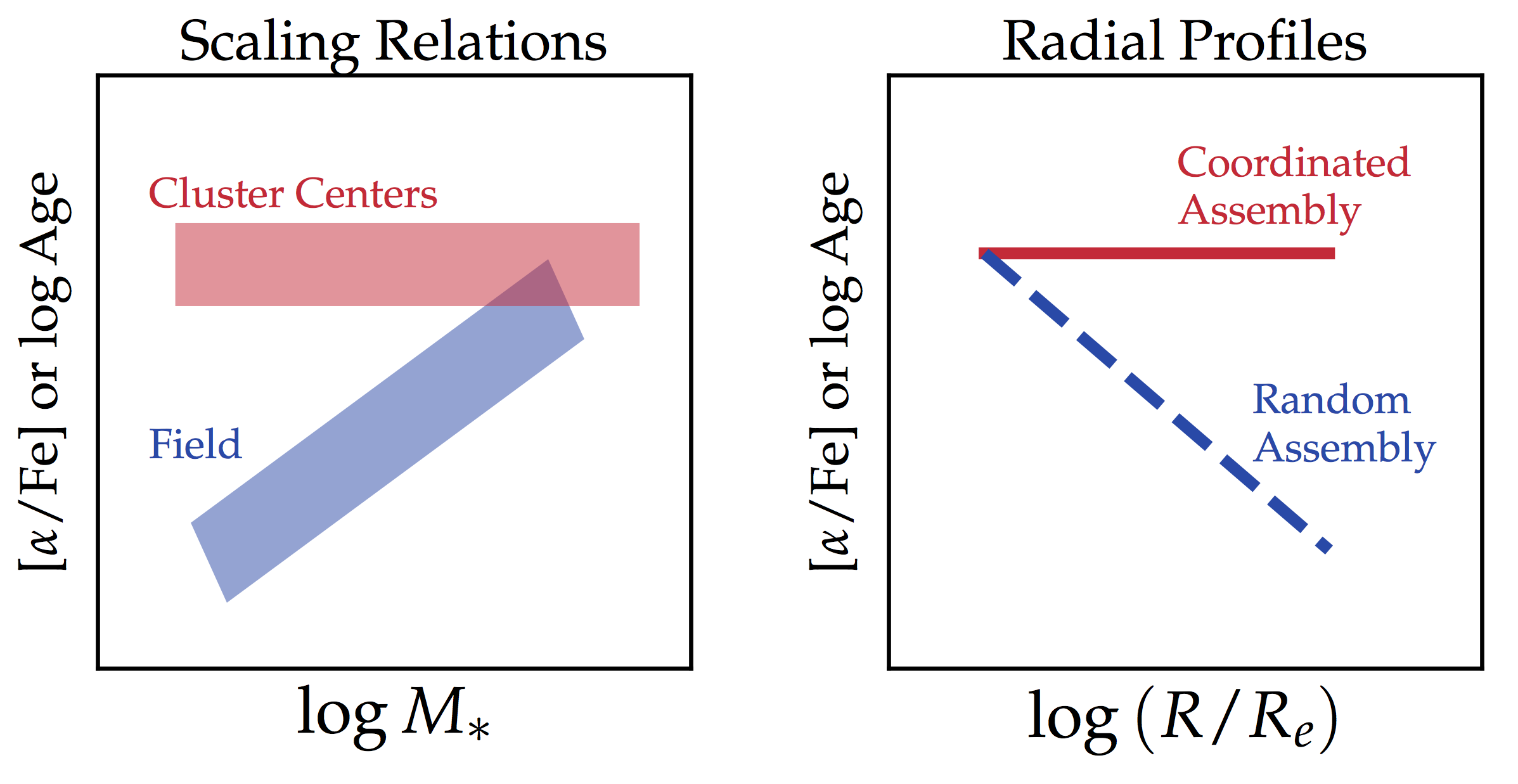 Brightest Cluster Galaxies (BCGs) in massive dark matter halos are shaped by complex merging processes. We present a detailed stellar population analysis in the central region of Abell 3827 at z~0.1, including five-nucleus galaxies involved in a BCG assembly. Based on deep spectroscopy from Multi Unit Spectroscopic Explorer (MUSE), we fit the optical spectra of 13 early-type galaxies (ETGs) in the central 70 kpc of the cluster. The stellar populations in the central R=1 kpc of these ETGs are old (6-10Gyr). Their [Fe/H] increases with stellar velocity and stellar mass. More importantly, [α/Fe] of galaxies close to the cluster center do not seem to depend on stellar velocity or stellar mass, indicating that the cluster center shapes the [α/Fe]-σ and [α/Fe]-M relations differently than other environments. Our results reveal the coordinated assembly of BCGs: their building blocks are different from the general low mass populations by their high [α/Fe]. Massive galaxies thus grow by accreting preferentially high [α/Fe] systems. 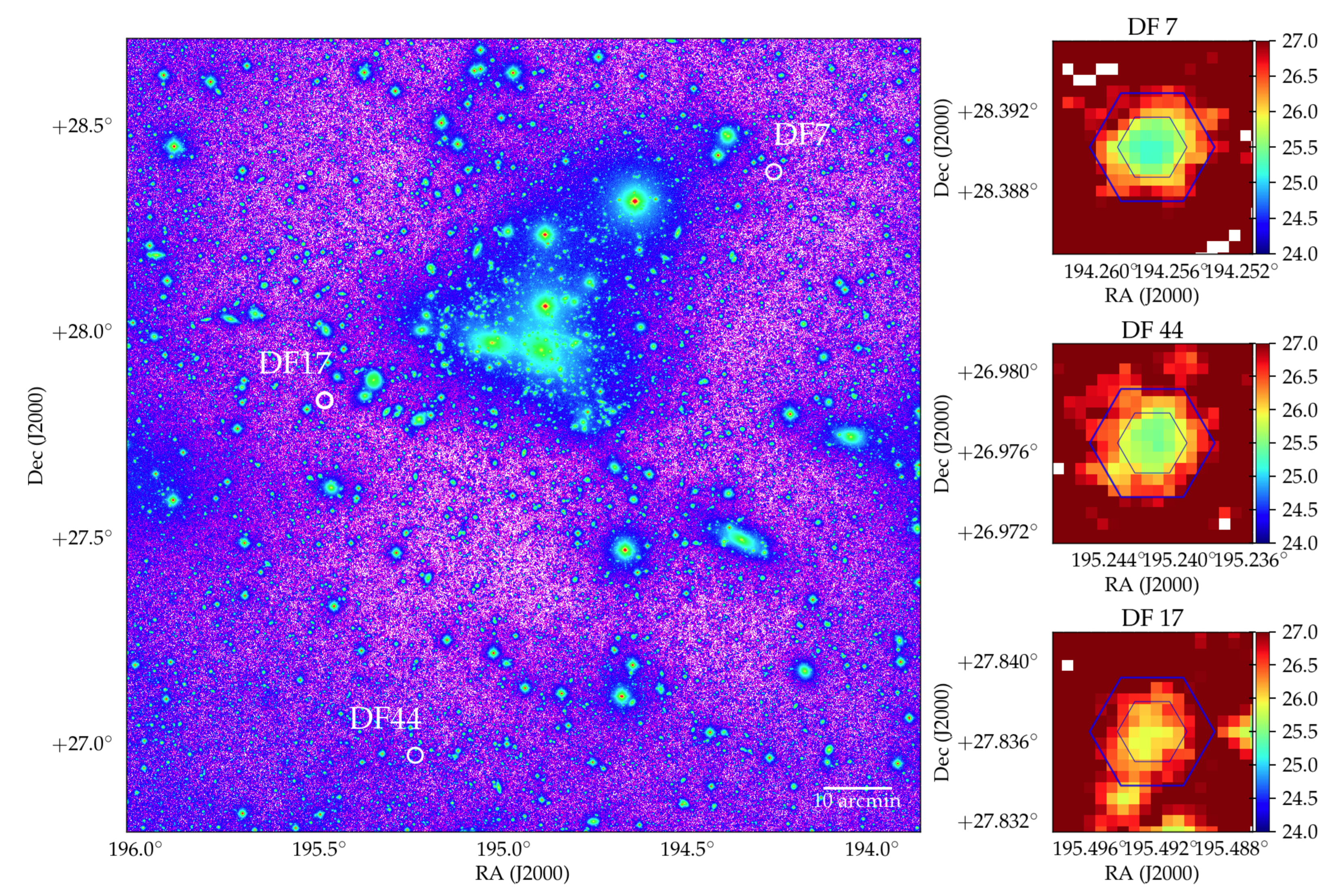 A large population of ultra-diffuse galaxies (UDGs) was recently discovered in the Coma cluster. We present optical spectra of three such UDGs, DF7, DF44 and DF17, which have central surface brightnesses of 24.4-25.1 mag/arcsec^2 in g band. The spectra were acquired as part of an ancillary program within the SDSS-IV MaNGA Survey. We spectroscopically confirming that all of them reside in the Coma cluster. The stellar populations of these three galaxies are old and metal-poor. The UDGs in our sample are as old or older than galaxies at similar stellar mass or velocity dispersion. They all follow the well-established stellar mass-stellar metallicity relation, while DF44 lies below the velocity dispersion-metallicity relation. These results, combined with the fact that UDGs are unusually large for their stellar mass, suggest that stellar mass plays a more important role in setting stellar population properties for these galaxies than either size or surface brightness. 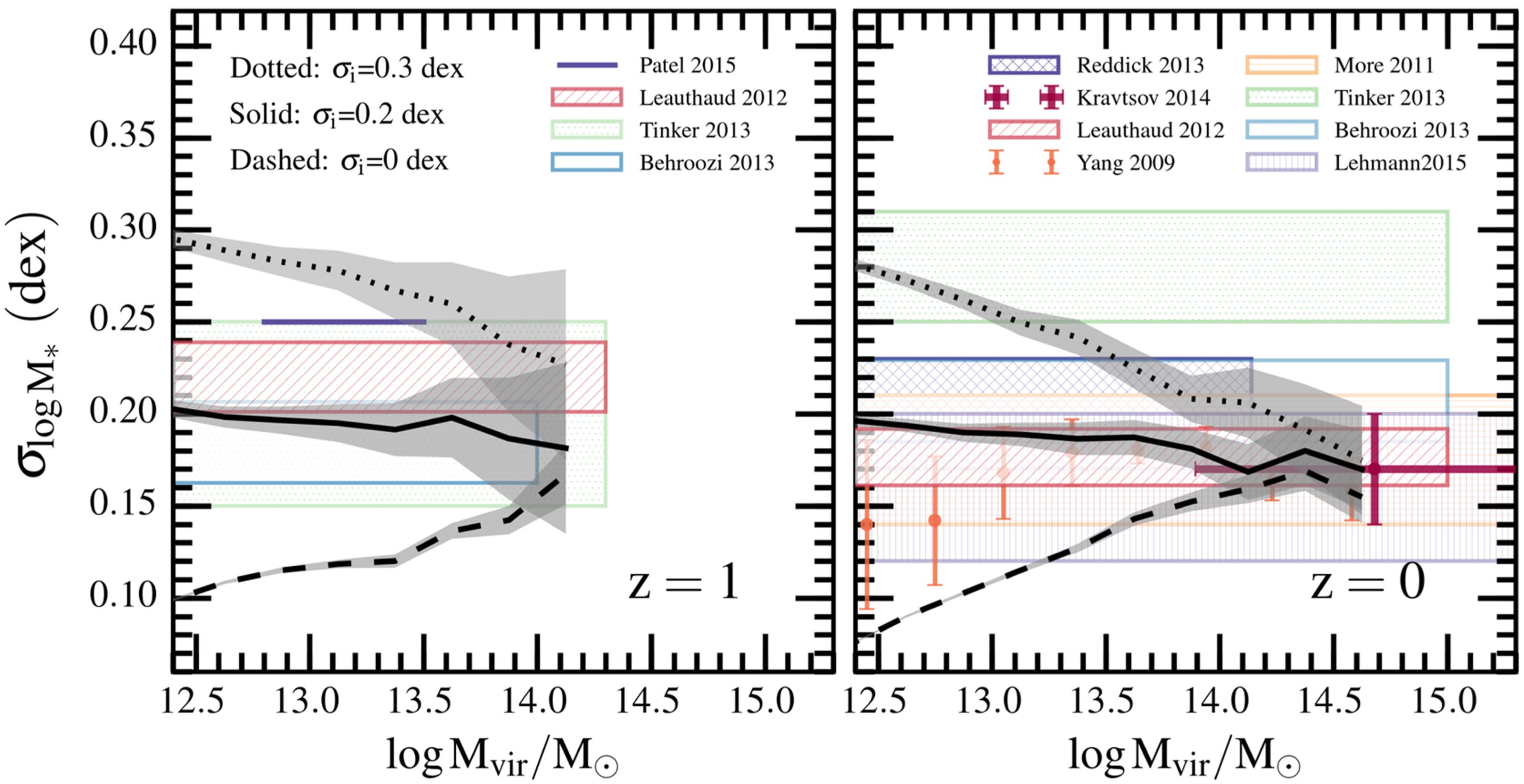 The relation between galaxies and dark matter halos reflects the combined effects of many distinct physical processes. Observations indicate that the z=0 stellar mass–halo mass (SMHM) relation has remarkably small scatter in stellar mass at fixed halo mass (~0.2 dex), with little dependence on halo mass. We investigate the origins of this scatter by combining N-body simulations with observational constraints on the SMHM relation. We find that at the group and cluster scale the scatter due purely to hierarchical assembly is ~0.16 dex, which is comparable to recent direct observational estimates. At lower masses, mass buildup since z~2 is driven largely by in situ growth. We include a model for the in situ buildup of stellar mass and find that an intrinsic scatter in this growth channel of 0.2 dex produces a relation between scatter and halo mass that is consistent with observations. The approximately constant scatter across a wide range of halo masses at z = 0 thus appears to be a coincidence, as it is determined largely by in situ growth at low masses and by hierarchical assembly at high masses. These results indicate that the scatter in the SMHM relation can provide unique insight into the regularity of the galaxy formation process. 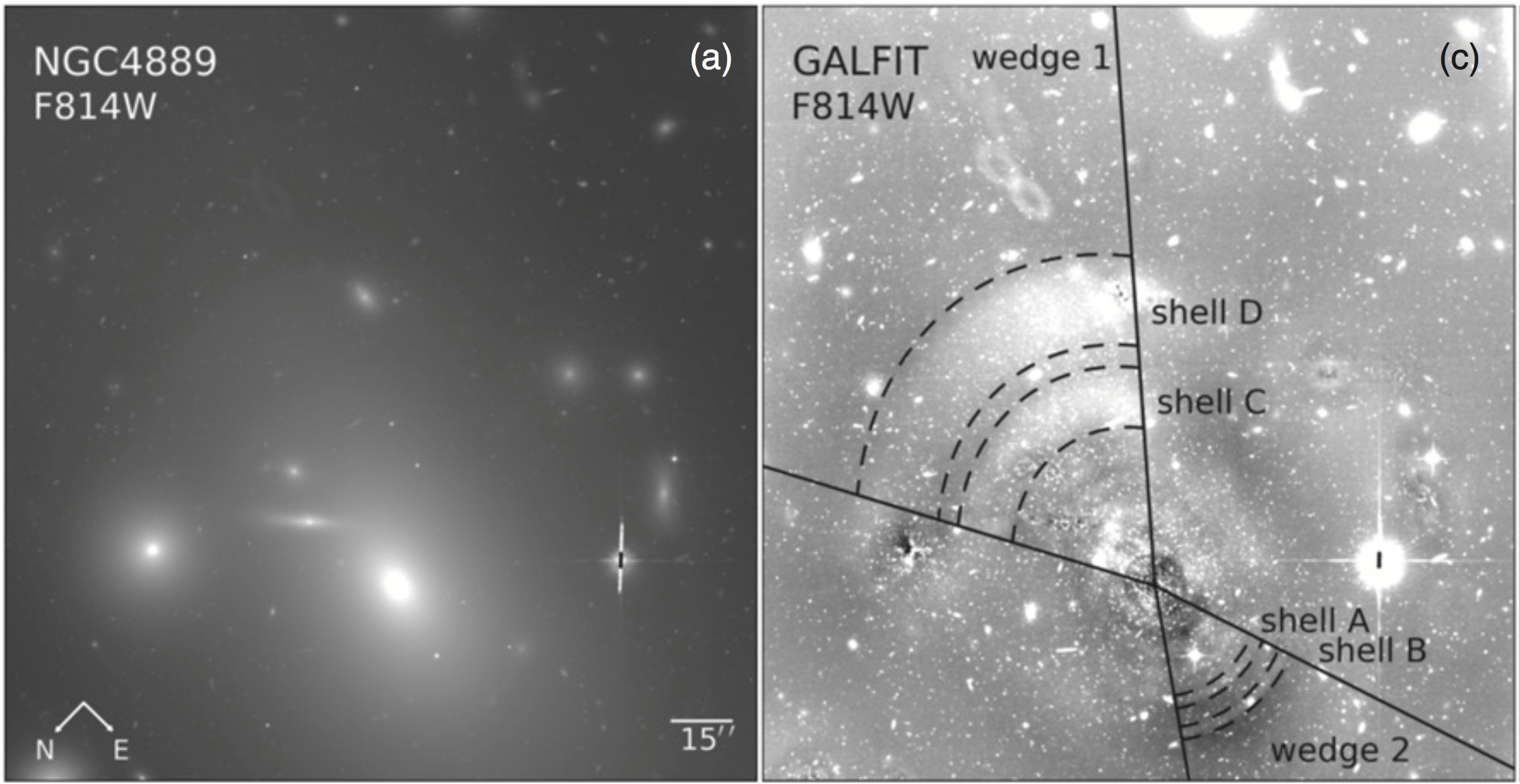 Minor mergers are thought to be important for the buildup and structural evolution of massive elliptical galaxies. In this work, we report the discovery of a system of four shell features in NGC4889, one of the brightest members of the Coma cluster, using optical images taken with the Hubble Space Telescope and the Sloan Digital Sky Survey. The shells are well aligned with the major axis of the host and are likely to have been formed by the accretion of a small satellite galaxy. We firmly detect the low-surface brightness shells, and accurately measure their luminosities and colors. The shells are bluer than the underlying stars at the same radius in the main galaxy. We make use of the colors of the shells and the color–magnitude relation of the Coma cluster to infer the luminosity (or mass) of the progenitor galaxy. The shells in NGC4889 appear to have been produced by the minor merger of a moderate-luminosity disk (S0 or spiral) galaxy with a luminosity (mass) ratio of ∼90:1 with respect to the primary galaxy. The novel methodology presented in this work can be exploited to decode the fossil record imprinted in the photometric substructure of other nearby early-type galaxies.